Using MDT 2010 for server deployment is one of those things that really make sense, it’s free, it is somewhat easy, pretty fast to get up and it does not require a large infrastructure and has very few dependencies. The last two things makes it a very decent candidate for smart server deployment. Yes, there will be a book on the subject…

No, this time we will take a look at two things  that I use basically all the time:

Many times I flash firmware before installing the OS, make sense to me to have the latest version before the server is put in production, now that normally works well but sometimes it just happens that my servers get affected by a “time-warp”, after flashing the server seems that 1980 is the current year, now that is not really an issue but I have had some bad experience around this, first the 60 days of trial is kind of gone, if you deploy domain controllers, well lets not talk about that. There is a very easy fix for this, you just modify the task sequence in the beginning so that the time gets set from the deployment server before the OS is installed:

No:2 – The Extra Partition…

When you deploy Windows Server 2008 R2 using MDT it will create an extra partition that has a size of 300Mb in the end of the first disk, that partition is meant to be the partition that stores the boot files if we are going to encrypt the drive using bit locker, now that is very nice… but since many of my servers are virtualized there is no point of that, even worse, since the partition is on the “right” side of the disk I cant just remove it if I need to extend the disk and then extend the partition, it is just something I don’t want to have. There is a variable called DoNotCtreateExtraPartiton that we can use, if we use with with the IsVM variable it is really easy, here is to pictures of how I do it in a task sequence, the first picture is the Properties tab where we set it and the next one is the options tab where we set the condition. 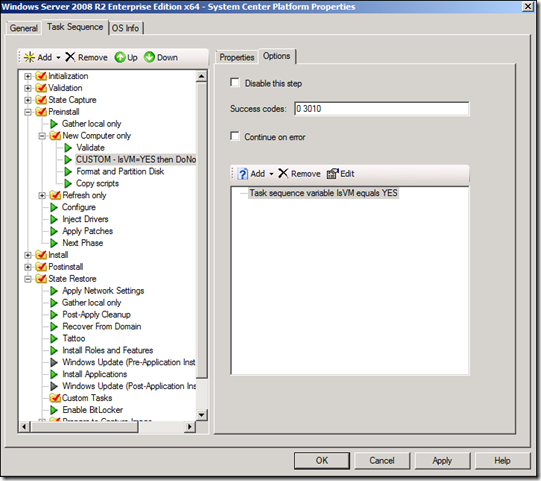