Long time ago I wrote a post on how to upgrade the BIOS/Firmware during the deployment of a PC in the beginning of a TaskSequence, since then I have been hammered with the question on how to do the same thing but later on, when Windows is running, that has been nagging me, (which obviously paid off for all of you that has been doing that). My friends, here it is, this time in PowerShell, but hey, I don’t do XP anymore.

The basic Idea is to have a PowerShell script run that will discover what bios version we have and IF we have an update run the update according the that model’s specific way of running a firmware upgrade. It is also possible to just use the PowerShell script as a framework for other similar task of course, or you could use it to kick off something like SSM(HP) to do the job. I did one change, besides using PowerShell and that is to copy down the files to the local drive before running the upgrade, just to be sure that a messy network does not break the upgrade. The script is tested with a couple of HP’s, a Dell and a Lenovo, so there is of course no way I can guarantee it will work with every piece of PC around the globe, but hey, its PowerShell so you can modify it on your own :-). I also created it as an application for MDT LiteTouch, so you need to modify it slightly to run it in SCCM and it also needs the “AliasUserExit.vbs” script since I’m using ModelAlias and MakeAlias. If you don’t like that, just change the lines in he PowerShell code to use Make and Model or anything else that you can read from WMI using PowerShell

The PowerShell script (section One)

This part is just about creating log files, and getting basic data from the TaskSequence/TSEnviroment

Here you can see the function that gets the SMBIOSBIOSVersion, and for all these vendors it is the same, but that could change in the future, so I decided to use the PowerShell Switch to figure out on how to get it. If you look close you can also see that I’m feeding back data to the TSEnviroment, that is not needed for this to work, but hey, you cannot get enough variables to play with, can you :-)

Here is when we get serious, you need to add every model that should be upgraded as a Switch Value and then update the $ExpectedBIOSVersion so it match what you should have. Then you need to add the BIOS update files in to the folder structure in the the Application and last you need to create/modify the UpgradeBIOS.cmd for each model so it runs whatever it is suppose to run to make magic happen. 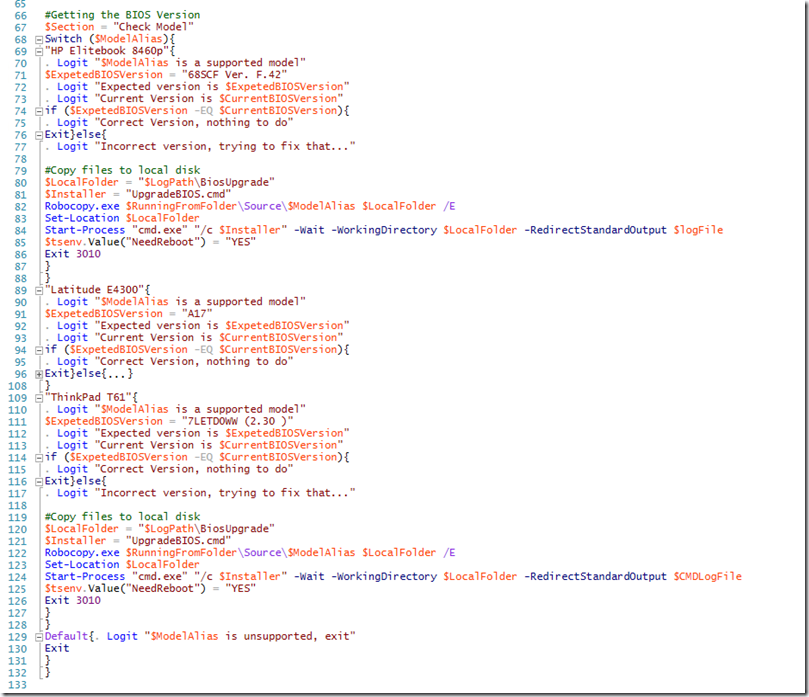 Here you can see the folder structure, in this case HP Elitebook 8460p also has sub folders, whatever the vendors has a structure I put in the folder and that will then end up on the local drive, where I run the batch file.

The Application in MDT

Just a standard “app” in MDT, I don’t use the “Run PowerShell” script since Applications are easier to modify, move, export, import, and play with. But there should no very little work to get it to work as a script instead, basically the only thing you need to to is to store the script in a folder that the TS can reach, all the folder structure and the file copy is based on where the script is located.

CustomSettings.ini needs to be updated!

To figure out if a reboot is needed or not I added a reboot step and reads the property RebootNedeed, so you need to add that to customsettings.ini

As you can see, I did create a folder for this, easy to copy, easy to move, easy to enable/disable. The restart computer step does have a condition, it only executes if RebootNeeded is set to YES, which is set IF you run the BiosUpgrade.CMD batch file, in the PowerShell script I do return 3010 and I also set the RebootNeeded to YES.